2ND ANNUAL BATTLE OF THE SEXES

BATTLE OF THE SEXES

MAMMOGRAMS SAVE LIVES! Pre-register for your breast screening. St. John Providence --Anthony L. Soave Family Mobile Mammography will be onsite to provide mammograms for breast health screening for pre-registered guest. Be sure to bring your picture ID & Insurance Card.  Complete the form  and return it via email at  team@livingbravetbc.org as soon as possible. The deadline is October 5, 2019

Register for your mammography today! 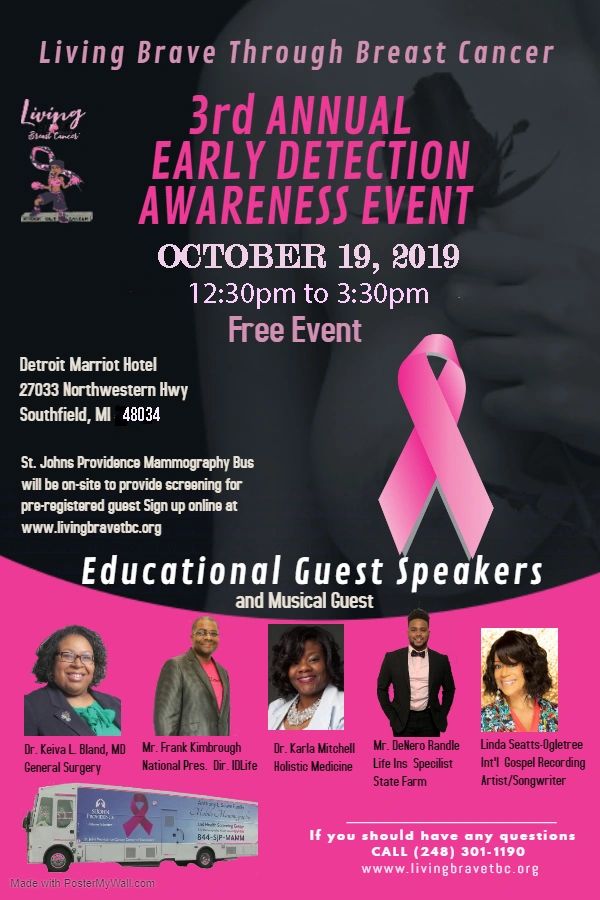 Come join Living Brave Through Breast Cancer, at our 3rd Annual Early Detection Awareness Event & hear four AMAZING Ladies journey through breast cancer. At this Educational Seminar you will learn a wealth of  information from educators. See the flyer for details.

“EACH ONE REACH ONE”

Come out and enjoy a magnificent time with our guest panel of speakers to become educated on a wealth of information that will bless you for a life time, a delicious meal by

TOGETHER WE CAN WIN!

If you or someone you know was diagnosed with "Breast Cancer", Living Brave Through Breast Cancer Organization would like to help. We are looking to assist five people who was diagnosed with breast cancer; (1 Man and 4 Women) each year by offering support, through fundraising for monetary gifts, to aid in medical services that can assist with early detection and nutrition information through livebrave.idlife.com to order customized vitamins for possible prevention. Our Goal is to build a family of fighters, survivors and guardians angels to make the world around us a better, happier place by supporting those in the fight. Our motto is "Each One Reach One" Please contact our organization via email at info@livingbravethroughbreastcancer.org. You never know if that someone maybe you or a love one. Please support by donating online or volunteering today.

Thank you in advance for your consideration and generosity

"IDLIFE is a health and wellness company that is revolutionizing the industry with customized nutrition."

Your answers will generate a report with scientifically backed supplement recommendactions creating your very own customized vitamin program."

Feel free to shop around on livebrave.idlife.com to order your Protein Shake Pack, Hydrate and Energy Packs as well as Lean to help promote weight loss!

JOIN US FOR EXCLUSIVE EVENTS WHERE YOU'LL MEET EVERYONE YOU NEED TO MEET TO MAKE YOUR 2018 GREAT!!!

AT THESE EVENTS YOU'LL GET INFORMED & INSPIRED TO LIVE THE

GET THE HELP YOU NEED TO ACHIEVE YOUR GOALS...

OPEN TO INVITED GUESTS WHO WANT TO LOOK AND FEEL THEIR BEST AND ARE READY TO ADD VALUE TO THEIR LIVES AND THE LIVES OF OTHERS!!!

Let's Fight Together / Each One Reach One/ Living Brave Through Breast Cancer Fundraiser T-Shirt will be available to order in August through October 3, 2018

Living Brave Through Breast Cancer hosted their 2nd Annual Early Detection Awareness Event that took place on October 27, 2018. Our organizations is based on a referrals service. Many people came out to support and Celebrated Life with 5 women, who are fighting and who have fought breast cancer. These fighters/survivors gave an impeccable story of about their health journeys.

We had a whole line of amazing educators that provided a wealth of information. A guest  speaker Tonya Wells, who is an 11 year survivor, Dr. Keiva Bland, M.D. provided a presentation on breast health and  early detection, which can save your life, National Presidential Director of IDLife, Mr. Frank Kimbrough, presented nutrition and customized vitamins, Dr. Karla Mitchell, presented  holistic health and Min. Andora Campbell informed us the importance of life insurance .  We were filled with knowledge and an amazing dinner served after the event, by Chef Charlene Harris with T&C Catering Services. Stay tuned for more exciting announcements.

Living Brave TBC, along with a host of Guardian Angels all around the USA, considering our founding motto "Each One Reach One", is determine to be a support.  No one should have to fight cancer alone.   If you know of someone who is fighting breast cancer or would like to volunteer, send us a referral via email at info@livingbravethroughbreastcancer.org, team@livingbravetbc.og (or)call the office at (248) 212-0888.

LaQuita Jackson-Davis - I would like to thank you for giving my niece LaToya your time, love,  all of the pouring out strength, courage helping her understanding how to handle and deal with this ugly situation she is facing at this time. Our family appreciated being a apart of and being invited  to come out to support the cause of this fight for life. This event was very important to us because it hit home with us it is our love one.

Patrice Randle  -  May God continue to bless you, and all of the families you are helping through this organization!

Dr. Mo Ran  - The vision you have is ordained by God. May God continue to shine his light and blessings on you. Keep doing his work. I love you and will always be your supporter.

HOOP FOR SUPPORT / Women vs Men on the court

BATTLE OF THE SEXES "WOMEN vs MEN"

The BATTLE OF THE SEXES, Pink vs Blue.  Game day, was Saturday, OCTOBER 20th. The Ladies took home the winning trophy beating the guys, 70 to 69. We are the champions my friend and we fought till the end.

On the Women's team, Ms. Ashley Danielle Jones, an Application Engineering and an alumni of  University of Michigan, Ann Arbor. An ALLSTAR Woman Basketball Player, who was recently honored at her  alma mater. The Men's team, Mr. DeNero Montez, a song writer and Insurance Agent, who also attended the University of Michigan Ann Arbor and  occasionally plays basketball. The two are came together with their teammates to battle it out on the court, "TEAM LIFE"  vs "TEAM COURAGE" to help raise funds to support those who are battling or have recently fought breast cancer.

The proceeds of this basketball fundraising event was given to individuals fighting breast cancer at the Early Detection Awareness Event which took place on October 27th, 2018 at Life Church, 4330 W Davison, Detroit, MI 48238 from 12noon to 5:00 pm. Many people came out in the cold and rain to celebrate with us, received a wealth of information, and enjoy a delicious meal served by T&C Catering Services. Living Brave TBC had another year of success .

Living Brave TBC, would like to thank  and honor all the  Guardian Angels who bought t-shirts and sent donations throughtout the USA, the volunteers who participated in the game, who came out to support both events and and those who sponsored the organization.

1st Annual Battle of the Sexes Basketball Event. Women won by 1 point... score 70 - 69. We had an amazing time. Check out this great video and pictures below. Hope to see you next year, you don't want to miss the excitement.

To volunteer for next year, please contact Zell Randle, Coordinating Director at (248) 212-0888 extension 2 or via email at info@livingbravethroughbreastcancer.org